There is lots of excitement building about the upcoming wedding between Prince William and the soon-to-be Princess Kate. They will be married on April 29 in London, England.

When there’s a big wedding—particularly if it involves the Royal family—people like to have a souvenir, or keepsake, to remind them of the big day. Lots of companies are churning out products with Kate’s and William’s picture on them. Some of them are nice but more often than not the products can be quite cheap and tacky and that’s part of the fun of it all.

Chuck And Vince: We Want ‘Em!

Recently the City of Toronto started a new recycling program. It lets people safely recycle unwanted electronic equipment like TVs, computers and phones. Before the new program, people had to take these things to a special depot. Now, they can just put them out by the sidewalk with their regular recycling bin, and workers from the City of Toronto will pick them up.

But how could Toronto spread the word about the new program? An ad agency called Publicis came up with a series of catchy TV ads featuring “Chuck” and “Vince.” They’re actors pretending to be wacky recycling workers.

Sometimes weird can be good.

Weird can be funny too, as demonstrated on the popular YTV show That’s So Weird. The Canadian television show is a sketch comedy program about a group of teenagers working at a fictional television station called So Weird TV.

That’s So Weird has been running for two seasons. The episodes are made up of silly commercials and even sillier television shows. Skits include spoofs of real-life TV programs like Degrassi: The Next Generation, This Is Daniel Cook and the UFC. They have even poked fun at the Twilight movies and Glee.

The Happiest Person In The U.S.

Alvin Wong is the happiest person in the United States. Literally.

Every day for the last three years, a polling company called Gallup has been doing a survey of a thousand Americans, asking them about their lives. They wanted to know what qualities make up the best lifestyle. They put all of the information together into something they call the “Well-Being Index.”

From the information, Gallup was able to figure out what makes Americans happy.

You may know that every year around Christmas many cable TV providers, like Rogers, offer their subscribers a “Fireplace Channel.” When you turn to the channel your screen fills with a burning firelog. It makes your TV look like a fireplace.

Now they’ve gone even further. Rogers is offering the “Rotisserie Channel.” A rotisserie is a barbeque pole that turns, to cook meat over a flame.

Every year, Rogers Cable offers a TV channel called the “Fireplace Channel.” It looks like a fire. It makes your TV look like a fireplace.

The Super Bowl last Sunday was very exciting. The Green Bay Packers won over the Pittsburgh Steelers, 31 to 25.

In the first quarter of the game, the Packers scored two touchdowns. It looked like the game might be a blow-out for the Packers. But then the Steelers scored with just seconds left in the half, putting the score at 21 to 10 at half-time. The Steelers kept the game close, but the Packers ended up winning 31 to 25. 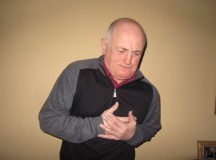 A group of co-workers at Bell Canada won $50-million in the lottery on New Year’s. However, they’re fighting about who chipped in for the Lotto Max ticket—and therefore who is entitled to a share of the winnings.
One woman in the office organized the lottery pool. Each month about 19 people put in $20 for lottery tickets. She says she has a list of who paid and who didn’t.
But some people who regularly go in on the pool are upset that they won’t get any of the money.

Imagine going on a long trip on a bus… and then the bus pulls over… and the driver gets out… and checks into a hotel room!

That’s what happened in a small town in Northern Ontario recently. More than 100 passengers were stuck on the Greyhound bus for more than 14 hours.

They were heading west from White River, Ont., when they pulled into a gas station. The driver got out and told the passengers to “sit tight.” Then he checked into a hotel.