Young People Can Get Involved In Upcoming Election

Ontario, like four other Canadian provinces, will hold a provincial election this fall.

Members of Provincial Parliament (MPPs) and the Premier of the province will be chosen.

Depending on the province and district, other positions will also be elected.

In one of Ontario’s districts, Scarborough-Agincourt, Soo Wong is running for MPP.

TKN asked her what young people can do to feel part of the political process when they’re not yet old enough to vote.

“It is the responsibility of every Canadian to understand what elections are about,” she said. “All of the young people will sooner or later become adults. It’s not just about today, but about moving this province forward.”

She said that young people need to be knowledgeable about the candidates and the issues so that when it is their time to vote, they are prepared.

Bixi Comes To Toronto And Ottawa

Big cities like Toronto and Ottawa have a lot of traffic.

All of those cars, taxis, trucks and buses create a lot of pollution. They also make getting around the city very difficult. There are a lot of traffic jams in big cities.

Some people ride bikes in the city. However, lots of bikes get stolen. Also, it can sometimes be difficult to find an empty spot in a bike rack when you want to store your bike downtown. Those things can discourage people from riding their bike around a big city.

But because biking is a much healthier way to travel than using a car, the City of Toronto and the City of Ottawa wanted to encourage people to ride a bike.

This summer, Toronto and Ottawa partnered with a company called Bixi to offer a new program which lets people rent a bike for short trips. People can ride to from one place to another downtown without having to own, use or lock up their own bicycle.

Thousands of young students across Canada take part in science projects to learn about the world around them.

Marshall Zhang, 16, in grade 11 in Richmond Hill, Ont., earned first place in a national science competition this year. He discovered something amazing while doing research on a disease called cystic fibrosis.

Marshall used a supercomputer network called SCINET. He had never used the network before, but quickly learned how to use it because he was already good at using computers.

“Marshall applied his interest and skills in computer graphics, which he developed while in Grade 5 and 6, to solve problems presented by cystic fibrosis,” said Tony Legault, the Toronto co-ordinator for the Sanofi-Aventis BioTalent Challenge science competition. 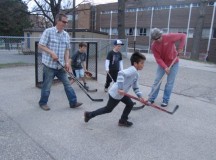 Street Hockey Banned In Toronto – Or Is It?

Right across the country, lots of kids play street hockey (or ball hockey) after school. A few kids, some sticks, nets if you have them, and a ball – that’s all you need for a great afterschool game.

But you may not know that street hockey is banned in Toronto.

Of course, many people – adults and kids alike – play the game anyway. They may not know it’s banned, or they may simply play and just hope they don’t get caught.

The City of Toronto is deciding whether to keep the by-law or change it to make street hockey legal.

Josh Matlow is a city councillor in Toronto. He thinks the by-law banning street hockey does not make sense since many people play street hockey anyway. He is fighting to lift the ban, especially for people who live on a residential street.

Manitoba is battening down the hatches because the water levels in the Red River are rising and it is threatening to overflow.

As the weather is getting warmer, large chunks of ice that formed during the winter are breaking apart and blocking the flow of the river. This is called an ice jam. Melting snow and rain are also adding to the rising water level.

Winnipeg is Manitoba’s capital and its largest city. The residents there have been advised to build walls of sandbags to protect their homes. The city handed out 1.8 million sandbags to homeowners. Many volunteers, including students, are being asked to help build the walls.

Two years ago, six-year-old Sam Pointon landed his dream job at the National Railway Museum in England. He became the museum’s Director of Fun, a position he still holds today.

While on holiday with his family, his father noticed in the newspaper that Andrew Scott would be retiring after 15 years of being the museum director.

Sam’s hobby was trains. He loved everything about them.

Sometimes weird can be good.

Weird can be funny too, as demonstrated on the popular YTV show That’s So Weird. The Canadian television show is a sketch comedy program about a group of teenagers working at a fictional television station called So Weird TV.

That’s So Weird has been running for two seasons. The episodes are made up of silly commercials and even sillier television shows. Skits include spoofs of real-life TV programs like Degrassi: The Next Generation, This Is Daniel Cook and the UFC. They have even poked fun at the Twilight movies and Glee.

The Bata Shoe Museum in Toronto recently added a pair of Justin Bieber’s shoes to its collection. The shoes, which he wore in a concert, are on exhibit in a glass case. Dozens of Bieber fans visited the museum last week to look at the famous singer’s shoes.

Bieber’s shoes are in good company. Other shoes in the museum belong to John Lennon, Marilyn Monroe, Queen Victoria and Terry Fox.

Bieber had donated the shoes to a California children’s charity, which put them up for auction to raise money. The Bata Shoe Museum had the winning bid.

It isn’t the first time Bieber’s shoes have been in the news. He recently donated a signed shoe to his old high school, Northwestern Secondary in Stratford, Ont. They sold the bright purple Nike running shoe to raise money for a new broadcast studio.

Did You See The Super Moon?

Last Saturday night you may have seen something in the sky that only happens every 18 years. It was a super moon.

A super moon looks a lot bigger and about 30 times brighter than the moon normally is. That’s because it’s closer to the Earth than normal. Its official name is a super “perigee moon,” but people just call it “super moon.”

The moon moves around the Earth in an oval shape, not a perfect circle, so there are times when the moon is closer to the Earth or farther away from it. On Saturday, the moon was really close to the Earth.

People all over the world could see the super moon on Saturday, including Australia, Russia, Canada and the United States. According to NASA, the last time a super moon like this was visible was 1993.

Rango is a new animated film about a chameleon who gets lost in the Nevada desert. He discovers a town filled with desert animals. Johnny Depp plays the voice of Rango the chameleon.

In the movie, Rango finds out that the water supply for the desert animals in the town is dangerously low. If they run out of water, they won’t survive. Rango has to figure out who is behind the problem and fix it. At the same time, everyone in the town thinks that Rango is a hero. He has to make sure no one finds out that he is really just a family pet.