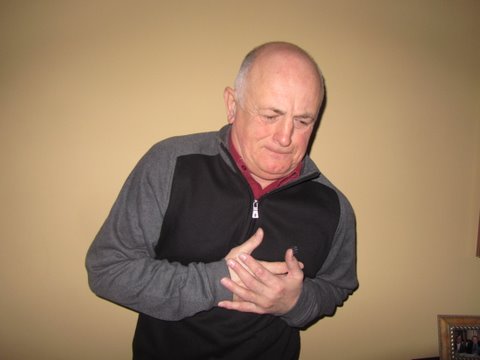 If a doctor-in-training practiced on a real patient, it could be very dangerous because he might get the diagnosis wrong and the patient might suffer.

That’s where Martin Edmonds comes in. He’s a Toronto actor who has an interesting side-business. He works as a “standardized patient,” acting out different illnesses so new doctors can diagnose him without fear of anyone being hurt.

Edmonds is told what illness to act out, and during the exam he’s told how he should act as the doctor examines him. For instance, the doctor may find him doubled up on the hospital bed, groaning and barely able to speak. The doctor has to take that visual information and figure out what’s wrong with him. The doctor will ask questions: “Do you smoke or drink alcohol?” “Do you eat enough fruits and vegetables?” And Edmonds must answer the way a real patient would—someone who actually has the illness.

Edmonds can also “get better.” When the doctor decides what’s wrong with Edmonds, he prescribes some medicine and asks the nurse to give it to the “patient.” If the doctor has made the right decision, Edmonds will be given a secret signal. Then he’ll pretend to take the pill, and act like he feels a bit better. The doctor has gotten the diagnosis right.

But if the doctor has guessed incorrectly, Edmonds will continue to groan and complain of pain, because the medicine hasn’t worked—maybe his condition has even worsened. The doctor will have to try again.

Edmonds has lots of fascinating stories about being a standardized patient and he enjoys helping new doctors learn their craft. “It’s something different every time,” he says. “It’s interesting work.

Writing/Discussion Prompt
People learn in many different ways.  Some ways people learn new information is by reading books, seeing an idea in a picture, or using music. This article explains that one way that doctors learn to diagnose and treat a patient is by treating fake patients who are only pretending to be sick.  This type of learning would work well for people who like to use drama to learn.

How do you learn best?  How do you use this way to learn new information?

Reading Prompt
In this article, there are several challenging words, such as: diagnosing, appendicitis and standardized.
Underline all of the words that are unfamiliar or uncertain.  Try to sound out these words and then look up their meanings in a dictionary or on the Internet.

Identify all of the scare quotes in the article and discuss why the author may have written in this way.