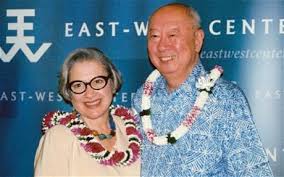 Alvin Wong is the happiest person in the United States. Literally.

Every day for the last three years, a polling company called Gallup has been doing a survey of a thousand Americans, asking them about their lives. They wanted to know what qualities make up the best lifestyle. They put all of the information together into something they call the “Well-Being Index.”

According to their polls, that happy person would have these characteristics:

Those are all of the qualities that people, over the three years, have said they think makes for the happiest lifestyle.

Then, they looked for–and found–a person who fit all of those criteria.

His name is Alvin Wong, and he’s married to a woman named Trudy. He is Chinese-American and has children. He’s 5’ 10”, 69 years old and is Jewish. He lives in Hawaii, runs his own business and makes more than $120,000 a year.

Wong has some advice for people who want to be happy like him. He says that even through the tough times, you need to live your life with a good sense of humour.

CURRICULUM CONNECTIONS
Writing/Discussion Prompt
According to the Gallup survey, “people with a certain amount of money said they were happiest.”  Why do you think money makes people happy?  Are there other things in life that are more important than money?  If so, what are they?

Primary
express personal thoughts and feelings about what has been read (OME, Reading: 1.8)

Junior
make judgements and draw conclusions about the ideas and information in texts and cite stated or implied evidence from the text to support their views (OME, Reading: 1.8)

Grammar Feature: The use of “ough”
In the article, there are two words that use the letters ‘ough.’  They are through and tough.  Read these words out loud.  Think about how they sound.  Through makes an ‘ew’ sound, and tough makes an ‘uff’ sound.

Look in books around your classroom or home.  Can you find any other ‘ough’ words?  What sounds do they make?