Tween TV May Be Harmful for Girls: Study

Think about your favourite tween TV shows. Is there a girl on them who isn’t pretty, or who doesn’t worry about how she looks?

Radio-Canada, the French-language branch of the CBC, announced on June 5 that it was changing its name to “ICI”.

So many people objected to the change, however, that on June 10 the president of the CBC said the broadcaster would keep the name Radio-Canada after all.

The organization uses the tagline “Ici Radio-Canada” on its TV and radio news stories. It wanted to “rebrand” itself with a name that could be used for all of its services – television, radio, satellite and website – so it planned to drop “Radio-Canada” from its name and be known simply as “ICI.”

But many Canadians were very upset about the name change. They objected to removing the word “Canada” from the name because the organization is part of Canada’s heritage, and because it is paid for with money from Canadian taxpayers.

CBC/Radio-Canada was created by the government in 1936 to be Canada’s national public broadcaster. The organization gets most of the money it needs to operate – about 60 per cent, or $1-billion a year – from the government.

Its official purpose is to provide programming that is “predominantly and distinctively Canadian,” and to “contribute to shared national consciousness and identity.”

Federal Heritage Minister James Moore, who is in charge of giving money to CBC/Radio-Canada, also opposed to new name. He said taxpayers would only be willing to pay for the broadcaster if it was Canadian in content and in name.

The Toronto Maple Leafs hockey team has finally made the playoffs.

Tomorrow, the Leafs will play their first post-season game since 2004.

Toronto hockey fans are well known for their enthusiasm for their team—and their patience.

They’re excited their team has finally made the playoffs again.

For each Maple Leafs playoff game Toronto’s CN Tower will light up blue, the colour of the Toronto Maple Leafs.

The University Of Winnipeg in Manitoba recently tested students to see if their texting habits made a difference to the way they thought.

In one part of the study, 2,300 first-year psychology students completed one-hour online surveys.

The survey asked about what they thought was important to them as well as how often they texted.

To heavy texters, an ethical or a moral life was not as important as those who texted 50 or fewer times a day.

Another part of the study tested how students felt about different social, racial and ethnic groups. In this part, some students texted, some spoke on cellphones and some did neither.

Celebs Sleep Outside For Homeless Fundraiser

Celebrities can usually afford a nice home, a comfy bed and tasty food.

But last Thursday, Arlene Dickinson and Brian Burke slept outside on the ground in only sleeping bags.

That night, the temperature dropped to 0-degrees C.

Dickinson is one of the “dragons” from TV’s Dragon’s Den, a show in which wealthy businesspeople invest in new businesses.

Burke is the General Manager of the Toronto Maple Leafs hockey team.

Both of them have plenty of money and can afford nice accommodations.

They were “sleeping rough” to help raise money for Covenant House, which provides shelter and services to homeless kids in Toronto and other big Canadian cities.

Selena and Justin — Why Do We Care?

Who knows what’s going on with Justin Bieber and Selena Gomez? Well, they do, for sure—but does anyone else?

Bieber is, of course, a famous teen pop idol and Gomez is a television actress; the couple has been dating on and off for the past couple of years.

But what do we really know about the couple?
\
That they had been dating. They have probably broken up.

In other words, what do we know? Not much. Almost nothing, in fact.

Last March a fire all but destroyed a very special playground in Toronto.

The city’s High Park children’s castle had been lovingly built by volunteers. Its destruction resulted in an overwhelming community response–including a day-long community celebration.

Celebrity contractor, Mike Holmes, stepped in with his crew to offer to lead the rebuild–an elaborate new playground structure.

Holmes filmed the rebuild for his television show, Holmes Makes It Right. It’s scheduled to air later this month.

The description for that episode reads:

When a beloved castle playground in Toronto’s High Park is damaged by fire, “Mike Holmes is fuming.

“He leads a legion of crewmembers, engineers, architects and firefighters into battle against extreme heat and construction challenges, all while the clock is ticking.

“With help from the community, Mike and his team overcome major setbacks to rebuild a brand new castle that’s fit for any King or Queen, teaching kids that they can rise above any obstacle and build their own kingdoms.”

Giant Slumber Party In The House Of Commons

The government of Canada had a sleepover, and all of the MPs were invited.

In fact, attendance was mandatory.

What’s really happened is that the Members of Parliament stayed up all night working.

They were voting on a bill, but the way they did it was very unusual—and very interesting.

Bill C-38 is an enormous 425-page bill covering all kinds of things including budget items.

The opposition party (the NDP) wanted to protest the fact that the government bundled all of those extra items into the bill.

They say that when too many items are bundled that way, none of the items can be looked over and properly discussed.

Many people like to fast-forward through commercials on TV.

However, there is one time when many people want to watch the commercials. And that’s during the Super Bowl football game.

It has become a tradition that the commercials shown during the Super Bowl are particularly interesting to watch. Many of them are funny.

For instance, in a Volkswagen ad, a dog sees a Volkswagen go by his house. He wants to chase it, but he’s too fat to fit through the doggie door.

So he starts exercising himself to get in shape.

He chases his own tennis ball, and he swims laps in a pool.

Eventually, he is able to fit through the doggie door and chase the car. 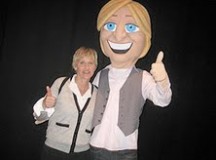 Mascot Creator Helps Ellen DeGeneres Be In Two Places At Once

In one episode of her popular talk show, Ellen DeGeneres bemoaned the fact that she couldn’t be in two places at once.

Lots of people wanted her at events, but her schedule was packed.

John Kernaghan was listening to her show that day.

He’s a Toronto-based mascot maker. His company, Hogtown Mascots, makes life-sized puppets that are used as “mascots” for companies and sports teams.

He decided to make it possible for the entertainer to be in two places at once.

John created a giant mascot costume that looked just like Ellen DeGeneres. And then he sent it to her.