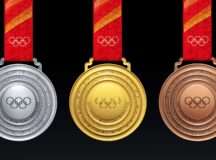 Moments from the 2022 Olympic Games

Some interesting moments from the 2022 Olympics so far.

Highlights of the 2020 Tokyo Olympics.

Paralympics In Rio, On Until Sept. 18

In one of the most exciting hockey games ever played, the Canadian women’s team took the top prize. It was a clash between long-time rivals US and Canada, the best versus the best.

The American women had a solid 2-0 lead going into the third period. But with less than four minutes to go, Canada’s Brianne Jenner put the puck past American goalie Jessie Vetter. The score was 2-1.

The Olympics are about athletics and competition.

However, with representatives from so many different countries coming together in one city, it is often about “politics” and “political issues” as well.

In other words, different countries have different rules, laws and beliefs.

That has been the case in Russia at the Sochi Winter Olympics.

McMorris is a native from Regina, Saskatchewan.

Saskatchewan is known for having very flat terrain, yet McMorris was determined to be a world-class snowboarder.

The eyes of the world are on Sochi, Russia, where the 2014 Winter Olympics are taking place.

Last Friday, the official opening ceremony took the audience on a Russian journey. It began with the Russian alphabet, with each of the 33 letters highlighting a famous Russian person or achievement.

Later, the athletes flooded into the stadium, grouped according to country. Canada, with 220 athletes, has one of the largest teams in this year’s winter Olympics. The Canadians came into the stadium, a sea of red, behind flag-bearer Hayley Wickenheiser.

“It’s an amazing feeling being able to carry the flag and lead in this awesome powerful Team Canada,” Hayley Wickenheiser told CBC News. “I’m a very, very proud Canadian right now. It’s great to be Canadian in moments like this; you realize how lucky we are to live where we live. I hope everyone back home is proud and enjoys the games.”