North And South Korea: Lasting Peace May Be Near

It was one step, but it represented the possibility of lasting peace for North and South Korea.

Kim Jong-Un, the leader of North Korea, walked to the border between his country and South Korea … and stepped over it, into South Korea.

There, he shook hands with South Korean leader Moon Jae-in.

It was a joining together not just of two leaders, but of two countries that have been at war for 65 years.

The Korean War began on June 25, 1950 and, although fighting ended in 1953 (when an armistice* was declared), no peace treaty was signed by both countries. Officially the two countries remained at war. 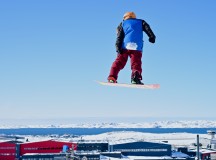 Athletes are travelling to Nuuk, the capital of Greenland, this week. They are going there for an event held every two years: The Arctic Winter Games.

A woolly mammoth carcass that was frozen in ice for 40,000 years may make it possible for scientists to bring the extinct species back to life.
The mammoth was found embedded in ice on a remote island off northern Russia in May 2013.