The Bata Shoe Museum in Toront 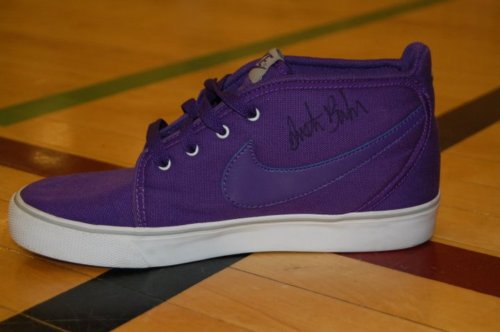 o recently added a pair of Justin Bieber’s shoes to its collection. The shoes, which he wore in a concert, are on exhibit in a glass case. Dozens of Bieber fans visited the museum last week to look at the famous singer’s shoes.

Bieber’s shoes are in good company. Other shoes in the museum belong to John Lennon, Marilyn Monroe, Queen Victoria and Terry Fox.

Bieber had donated the shoes to a California children’s charity, which put them up for auction to raise money. The Bata Shoe Museum had the winning bid.

It isn’t the first time Bieber’s shoes have been in the news. He recently donated a signed shoe to his old high school, Northwestern Secondary in Stratford, Ont. They sold the bright purple Nike running shoe to raise money for a new broadcast studio.

The highest bid for the shoe was $5,500, by a young girl in Edmonton. One problem: she forgot to ask her mother for permission! The auction was held on eBay and 69 bids were made from all over the world – including Canada, Australia, Poland, England and the United States.

The girl’s mother ended up pulling out of the bid for Bieber’s shoe. The school decided to start another auction, which will run on eBay from March 23 to 30. The school still has the size 7½ left shoe and hasn’t decided what to do with it yet.

Incidentally, Justin Bieber’s shoes have their own Facebook page. And the page has more than 2,500 fans.

Writing/Discussion Prompt
Why do you think people are interested in Justin Bieber’s shoes?  If you had the choice, would you go and see them at the museum?  Why or why not?

Is there another celebrity’s shoe that you would like to see?  Why would you pick this celebrity?  Do you think you could learn anything new about them by seeing their shoe?

Primary
read appropriate texts at a sufficient rate and with sufficient expression to convey the sense of the text to the reader and to an audience (e.g., make oral reading sound like spoken language, with the appropriate pauses, stops, and starts  indicated by the punctuation) (OME, Reading: 3.3)