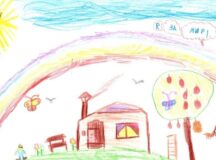 One Good Thing: Opportunity for Children to Create and Share Art for Ukraine

Kids around the world are posting art supporting Ukraine with #KidsDrawPeace4Ukraine. 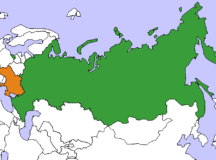 Crimea Has The World’s Attention

Some events are happening in Crimea and the world is taking notice of them.

The small peninsula of Crimea, attached to the country of Ukraine, sits in the middle of Europe. Crimea is about half the size of the Canadian province of Nova Scotia; about two million people live there.

Crimea is at the centre of a major political battle between Russia and Ukraine. The rest of world is watching that conflict closely.

The former president called it a coup d’état, which in this case means that political power was taken from him by force.

Several weeks ago, peaceful protestors took to the streets calling for the president to join the European Union.

Yesterday, demonstrators clashed with police in Kyiv, the capital city of Ukraine.

The Prime Minister of Ukraine, Mykola Azarov, resigned from his job on Tuesday.

Experts say this should help to ease some of the tensions that have been building in that country.

The tensions began in November when Ukraine’s president, Viktor Yanukovych, made a surprise move to bring Ukraine closer to Russia rather than European Union (EU).

He asked Russia to lend Ukraine some money, rather than asking the EU for it. Ukraine needed the money to help its economy.

Many Ukrainians had looked forward to a closer association with the European Union because they felt it would bring democracy to their country.

Europe In The Grip Of A Cold Snap

Some countries in Europe are experiencing a bitterly cold winter.

Ukraine, in eastern Europe, has been especially hard hit. More than 100 people have died there in the last week, as temperatures dropped as low as -30C. Many of the people who froze to death were homeless people living in the city’s capital, Kiev.

In Bosnia-Herzegovina, there have been avalanches and strong winds. The country declared a state of emergency.

One woman in Croatia had to have neighbours help her give birth to her baby after the ambulance could not reach her because of a blizzard. She later named her baby Snjezana, which is Snow White in Croatian.