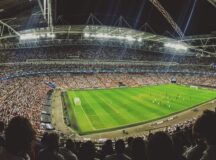 The world cup of soccer is set to take place in June, 2014 – without Canada.

The World Cup of Soccer happens every four years.

It’s one of the most watched sporting events in the world. The next World Cup will be in Brazil, in South America.

The World Cup offers 32 teams the chance to compete in the World Cup Finals for the glory of being the best soccer nation.

Last weekend, one of the most exciting games in the PL took place… and it came down to the final moments. It was a game that would decide who took home the cup.

However, a win wouldn’t come easy.

Toronto Impresses In Its Biggest Soccer Game Ever

It was arguably the biggest soccer game in Canadian history.

Certainly it was the biggest and most exciting game the Toronto soccer team, Toronto FC, had ever played.

Beckham is not just one of the world’s best soccer players; he’s also a world-famous celebrity.

The teams met to play a quarter-final match in the CONCACAF Champions League, which is a tournament featuring teams from North America, Central America and the Caribbean.

It was the first time a Canadian team had been in the CONCACAF playoffs.

That’s because he was only three years old—they waited until he was five.

Coaches at United say that Jackson is going to be a superstar player.

Even at three years of age, he impressed talent scouts with his ability to handle and control the ball.

One sports writer called it, “a loss that felt like a win,” and indeed it was.

The Canadian women’s soccer team lost its first game 2-1 to Germany in the Women’s World Cup in Berlin on Sunday.

But during that game, one player in particular showed what she was made of–courage, skill and determination.

Going into the match, Germany was heavily favoured to win.

They had already won the World Cup twice before. In 2007 they won the Cup without giving up a single goal.

In fact, they haven’t given up a single goal in competition since October.

But something happened around half-time.