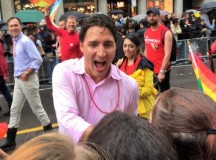 What Do You Remember About 2015? Take Our Quiz!

How much do you remember about the news events that happened in 2015? Take our fun quiz and try to get a perfect score: 25 points!

One of the craziest, most thrilling games in major league baseball history occurred at the Rogers Centre in Toronto last Wednesday.

Every professional baseball pitcher wants to throw the ball so the batter can’t hit it.

There are lots of ways to do that.

One way is for the pitcher to throw the ball so that, after it leaves his hand, it “dips down.” That’s known as a curve ball.

Curve balls are tricky to throw. One reason is that it’s hard to grip the smooth, slippery ball.

Last week, a pitcher from the Yankees baseball team was caught using sticky pine tar so he could grip the ball better.

Pitcher Roy Halladay: One Final Day As A Blue Jay

One of the finest baseball pitchers in the history of the sport retired yesterday.

And he went out as a Blue Jay.

Roy Halladay had a distinguished career as a pitcher, with a record of 203 wins and just 105 losses.

He spent 12 years wearing a Blue Jays uniform; the last four years of his career he pitched for the Philadelphia Phillies.

On May 29, 2010, Halladay pitched the 20th perfect game in Major League Baseball history. Then, he threw a no-hitter on Oct. 6—only the second no-hitter in MLB post-season history.

He won the Cy Young Award twice and was selected eight times to play in special All-Star games.

In addition to his impressive baseball skill, Halladay is also known as an upstanding person who gave generously to people in need.

Although at the end of his career Halladay played for the Phillies, he wanted to finish his career as a Toronto Blue Jay.

Boston finally has a reason to celebrate–and that’s exactly what Red Sox fans are doing.

Fans took to the streets last weekend to celebrate the fact that their baseball team won the World Series.

The parade made an important detour.

It stopped at the Boston Marathon finish line.

Last April, there was a terrible bombing during the Boston Marathon race, which took the lives of three people.

The city–and people all over the world–were upset by the tragedy.

Mark Buehrle is a baseball pitcher who recently joined the Toronto Blue Jays.

Buehrle is an extraordinary pitcher. He is one of only 18 people in the game’s history to pitch a “perfect game.”

The Blue Jays are pinning some of their hopes of winning this season on Buehrle.

However, there is a problem. When Buehrle signed on with the Jays, he had to move to Toronto.

A Giant Panda Makes His Mark On Baseball

He’s a giant among Giants, and now his name will forever be in baseball’s record books.

Wednesday night was the first game in this year’s World Series. The World Series is the annual championship series of Major League Baseball (MLB).

Since 1903, the World Series has been the big, end-of-season battle between the best teams from the American League and National League.

This year the Detroit Tigers of the American League are playing the San Francisco Giants of the National League.

In game one on Wednesday night, history was made. The Giants beat the Tigers and their impressive pitcher, Justin Verlander.

The highlight of the night, however, was made by the Giants’s heavy-hitting third baseman, Pablo Sandoval.

Sandoval was born in Venezuela. He is affectionately known to his teammates as Kung Fu Panda.

When the Los Angeles Angels baseball team is losing, they’ve got a strange and funny way of rallying the team.

A rally, in this case, means when the fans and players on the losing team get themselves all fired up so they can try even harder to win the game.

For some baseball teams, fans use “rally towels” to try to help them rally. A rally towel is a white towel that fans bring out when their team is losing; they twirl the towels over their heads. The team sees all the white towels and realizes that the fans are behind them and want them to win.

For other baseball teams, fans wear “rally caps.” A rally cap is simply a baseball cap worn inside-out and backwards. It’s the fans’ way of saying, “Let’s go, team! We can win it!”

But the Los Angeles Angels may have the strangest way of rallying the team. They have a rally monkey.

Last Saturday, a relatively unknown pitcher did something that’s only been done 20 times before in the whole history of Major League Baseball.

The last time it happened, was in 2010. And it’s only happened for the White Sox twice before, in their 112-year history.