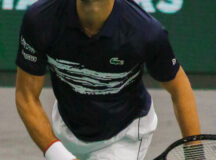 Genie (And Her “Army”) Marching Towards Tennis Stardom

Eugenie “Genie” Bouchard from Montreal, Quebec, recently made tennis history for her country.

She made it to the semi-final round of a tournament called the Australian Open.

Bouchard is the 30th ranked female tennis player in the world.

On Monday she played against Ana Ivanovic, the 14th ranked female tennis player in the world.

However, Bouchard had other plans.