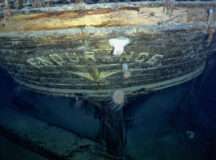 The 100-year-old ship Endurance has been found in Antarctica.

A team of Canadian scientists and archaeologists has found the wreckage of a ship that was lost in Canada’s Arctic almost 170 years ago.

The enormous cruise ship, The Costa Concordia, no longer lies on its side, rusting in the Mediterranean Sea off the coast of Tuscany, Italy.

It was the largest salvage operation of its kind.

An Australian billionaire named Clive Palmer is building a life-sized replica of the Titanic.

The Titanic is a famous ship that sank in 1912. The dramatic story of the ocean liner has fascinated millions of people around the world. It was supposed to be an unsinkable ship but it hit an iceberg and sank on its very first voyage.

There have been many documentaries, films and books about the Titanic. Interest in the ship was heightened in 1997 when a blockbuster movie called “Titanic” was released, starring Leonardo DiCaprio and Kate Winslet.

The replica Titanic ocean liner will be called Titanic II. It is scheduled to sail in 2016, from Southampton, England to New York in the United States.

Picture this. You’re on a plane, flying from Vancouver, B.C. to Sydney, Australia.

You’re flying over the Pacific Ocean. For the last 12 hours, your flight has been perfectly uneventful.

And then suddenly the captain’s voice comes over the plane’s speakers.

There is a boat in distress, the captain explains. And the plane is going to change course in order to help look for it.

The captain was told there was a “vessel in distress” somewhere in the Tasman Sea, which is between Australia and New Zealand.

A yacht with one person aboard had left Sydney, Australia, about two weeks earlier. It had lost its mast, was very low on fuel and had been drifting.

In 1906, a ship carrying 480 tons of coal sank in Lake Ontario.
The ship was a schooner, with three huge masts, and it was called Queen of the Lakes.

The ship ran into bad weather near Lake Ontario’s southern shore, and started to leak. It sank quickly.
The six crew members abandoned the ship and rowed safely to shore.

Some people, whose hobby is looking for sunken ships, located the in 2009 using a sonar machine.
The Queen of the Lakes was in water that was too deep for divers to reach her.