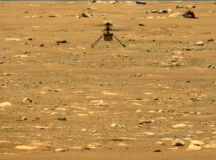 Ingenuity, a small helicopter, is the first aircraft from Earth to fly on another planet.

Scientists Now Certain There Is Water On Mars

Scientists at NASA announced last week that they have found evidence of liquid water on Mars. The discovery has given scientists new hope that some form of life might exist on the planet.

Volunteers Preparing For Life On Mars

Six people are about to find out what it would be like to live on Mars – without ever leaving the Earth.

The Latest In Martian Fashion

NASA has unveiled the design of its Mars space suit.

MAVEN Spacecraft Takes Off For Mars

This week, a “robotic explorer” left Earth on its way to Mars.

It should get there next September. Mars is more than 700 million kilometres away.

The explorer is going to Mars to try to solve some of the planet’s mysteries.

For instance, why is Mars now a cold, dry planet when it started out warm and wet?

The Associated Press reports that “the early Martian atmosphere was thick enough to hold water and possibly support microbial life.”

Scientists at NASA want to know what happened to change that.

A Dutch business owner is looking for people who want to live on Mars.

He believes that with proper preparation, a human settlement can exist on the Red Planet.

He said the settlement would provide valuable information for those who support and study life beyond Earth.

The project is called Mars One and nearly 80,000 people–including 35 Canadians–have applied to start a new life on Mars.

Those who are chosen to go would set up a colony, similar to a city.

Supplies for the colony will be sent to Mars beginning in 2016.

The first four settlers are scheduled to be transported to Mars in 2023.

Hundreds of people can walk by your front door every day.

The only time you may notice someone, however, is when they knock. Last week, the universe knocked on Earth’s door.

Thousands of asteroids and meteoroids streak pass planet Earth every year. Some of them enter Earth’s atmosphere where most of them simply burn up—those are called meteors. Any that land on Earth are called meteorites.

When a meteorite landed in the city of Chelyabinsk, Russia last Friday, the world took notice. That’s because it was a particularly large meteorite; one chunk was about the size of a van.

No Signs Of Life On Mars… Yet

Scientists have not found any signs of life on Mars yet, but they say a robotic vehicle called “Curiosity” is helping them learn a lot about the planet’s history and climate.

Curiosity landed on Mars in August 2012 after travelling through space for more than eight months.

It was sent to Mars by scientists from NASA in the United States.

Curiosity is a motorized vehicle called a “rover” which is controlled by scientists back on Earth.

It is about the size of a car and has six wheels that allow it to travel across the planet’s surface and climb over sand and rocks.

It also has a robotic arm, cameras, and instruments such as a scoop, drill and microscope that allow it to examine things it finds on the surface.

Then it transmits the information back to Earth.

The main purpose of Curiosity’s mission is to find out if anything could live on Mars, either now or in the past.

On Nov. 2, NASA scientists held a press conference to discuss what Curiosity had found in its first two months on Mars.