North And South Korea: Lasting Peace May Be Near

It was one step, but it represented the possibility of lasting peace for North and South Korea.

Kim Jong-Un, the leader of North Korea, walked to the border between his country and South Korea … and stepped over it, into South Korea.

There, he shook hands with South Korean leader Moon Jae-in.

It was a joining together not just of two leaders, but of two countries that have been at war for 65 years.

The Korean War began on June 25, 1950 and, although fighting ended in 1953 (when an armistice* was declared), no peace treaty was signed by both countries. Officially the two countries remained at war.

“In All Of Us Command”

Some of the words to Canada’s national anthem have been changed. In O Canada, the line, “in all thy sons command” has been changed to “in all of us command.” Last week, Canada passed Bill C-210. That bill changes “the National Anthem Act to substitute the words “of us” for the words “thy sons” in the English version of the national anthem, thus making it gender neutral.” Once the bill is approved by the Governor General, it will be come a law.

The Houston Astros won the World Series, the biggest achievement in baseball each year, for the first time in their team’s history.
They beat the Los Angeles Dodgers four games to three.
The Astros won the seventh game of the World Series 5 to 1 over the Dodgers on Nov. 1.
It was a hard-fought battle. The two teams were evenly matched. The fact that the World Series even went to seven games means that neither team ran away with the championship.
The Astros won game seven early. They got five points in the first two innings, putting them ahead of the Dodgers right from the start.

Malala Yousafzai has a message for Canadian kids: Don’t wait, to make a difference. Just because you’re young doesn’t mean you can’t be a leader.
Yousafzai is an activist for children’s rights, and particularly the right for girls to get an education.
In this case, “activist” means that she tries to get that message out, no matter how difficult that may be for her. 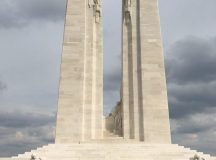 On April 9, Canadians commemorated the 100th anniversary of the Battle of Vimy Ridge in the First World War.

Vimy Ridge is in France, and it was there that a Canadian military force took back the area from the Germans in a battle that many people at the time considered unwinnable.