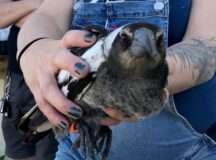 Some magpies in Australia have taught researchers some lessons.

Nine-year-old West James was sailing to Hawaii with his father, Brad, and his uncle, Mitchell last week.

The boy had permission from his mother and teacher to take the trip if he documented (wrote about) the voyage.

The three were in the Pacific Ocean on their way to Mexico when they ran into a series of squalls, sudden storms with high winds and waves.

The storms flooded the sailboat’s engine and damaged their boat’s mast. They tried to rig a new sail, but it blew away.

When Mitchell James tried to fix the mast, he fell into the cold, choppy water. The others got him back in the boat but they feared he had a concussion (head injury).