Seven young people in Ontario are taking the provincial government to court over its plan for fighting climate change. 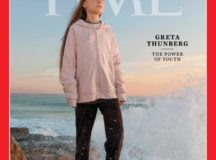 Time Magazine has named Swedish climate activist Greta Thunberg its Person of the Year for 2019.

Canada’s new prime minister, Justin Trudeau, is getting a lot of attention around the world. Do you know why? (kid-friendly news article)

A group of scientists associated with the United Nations has just issued a report on “climate change.”

The Intergovernmental Panel on Climate Change has confirmed that human habits and activity is responsible for global warming and for higher sea levels.

If this continues, according to the report, there will be more dramatic changes in plant and animal life.

But the UN report says the reality is clear and the facts are there.

Millions Of Butterflies In Ontario And Eastern Canada

If you were sitting outside on April 16 in Eastern North America, you may have seen a wondrous site. That day, millions of Red Admiral butterflies flew in – or perhaps “blew in” – from the southern United States.

Drew Monkman is a local natualist (“nature watcher”) and writer, living in Peterborough, Ont. He tracks the habits of animals including butterflies.

He told TKN that the April 16 migration was “completely unprecedented. (The Red Admiral has) never been seen in these kinds of numbers.”

He said on that day there were probably several million butterflies, most of them Red Admiral, but there were other species as well.

Drew Monkman is a naturalist and butterfly expert living in Peterborough, Ont.
Why did this happen? This year in the southern United States like Texas, where the butterflies began their journey, the winter was “amazingly mild,” said Monkman. This allowed more butterflies to survive the winter and reproduce.