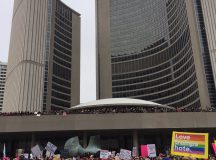 However, many people would argue that a more appropriate title for Castro would be dictator. (A dictator is a political leader who holds unlimited power and does not allow opportunities for new governments to form, as in an election).

The U.S. Election: What Is Going On?

In the United States, there are two main political parties: The Democrats and the Republicans. Each party picks a leader, and then those leaders go head-to-head in a big election for president.

Donald Trump has emerged as the person who will be the leader of the Republic Party in the U.S. The leader of the Democratic Party hasn’t been decided yet; Hilary Clinton seems most likely to win, although Bernie Sanders still stands a chance of winning; there are others still in the race as well, although they are not as likely to win.

Canadian Prime Minister Justin Trudeau visited Washington, DC recently. It was the first time a Canadian PM has paid an official visit to an American President in 20 years. It was an historic occasion.