Where Is Moammar Gadhafi?

The leader of Libya has fled his country and is in hiding.

No one knows where he is, but many people are looking for him.

Earlier this year, the people of Libya demanded that Colonel Gadhafi step down as leader of the country because, since the 1960s, he has used bullying and violence to make the people do what he wanted.

The United Nations International Criminal Court has charged him with “crimes against humanity.”

The war continues to this day, although the rebels have taken over most of the country including Tripoli, the capital city, and they are creating a government of their own.

Gadhafi and his supporters are not giving up.

Japan Gets A New Prime Minister

Japan has a new prime minister.

In August, Naoto Kan stepped down as the country’s prime minister.

He said he had failed the country by not doing a good job of helping Japan recover after it was rocked by an earthquake last March.

On March 11, the fifth most powerful earthquake in history took place in the sea off the coast of Japan. It caused a tsunami, or giant sea wave.

Waves up to 10 metres high flooded the coast of Japan, causing massive damage to many homes and to a nearby nuclear energy plant.

In addition to the problems caused by these natural disasters, Japan also has the largest debt of any country in the world.

Debt is the money the country owes to other countries and to banks. 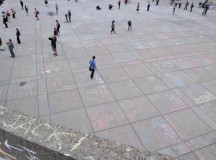 It began with one message of remembrance written in chalk on a wall outside Toronto’s City Hall.

It is one way that people are mourning and remembering one of Canada’s most beloved political leaders, who died on Aug. 22.

Layton’s death is affecting many people across the country—even people who didn’t agree with his political point-of-view.

Since 2005, Canadian troops have been fighting in Afghanistan against terrorists.

Now, Canadian soldiers are ending their mission in Afghanistan.

Troops will start coming home in July, with some staying on for another three years or so—not to fight, but to train the army and police in Afghanistan so they can take care of their own people.

Canadian soldiers were first sent to Afghanistan in 2001. Their duties were not to fight.

They were to make sure Canada would be safe from terrorists, to show Canadian leadership around the world, and to help Afghanistan rebuild.

Prime Minister Didn’t Choke On Hash Browns – Or Anything

Prime Minister Stephen Harper was the victim of a practical joke, or “hoax,” on Tuesday.

The article said Harper had been rushed to hospital after he had choked on some hash browns at breakfast.

It said that his wife, Laureen, called 911 because the Prime Minister couldn’t breathe and that he was taken by helicopter to a hospital in Toronto.

Who Was Osama Bin Laden?

Two weeks ago, US President Barack Obama went on television to make an historic announcement. He said that US troops had killed Osama bin Laden, the man responsible for the terrible events on Sept. 11, 2001 (known as 9/11).

On Sept. 11, thousands of Americans and 24 Canadians died in terrorist attacks.

For many Americans and other people around the world, bin Laden’s death gave them a sense that justice had been done. On that day, hundreds of people went to “Ground Zero” in New York, where the World Trade Center towers had been destroyed, and cheered because bin Laden was no more.

Osama Bin Mohammed bin Awad Laden was born in Saudi Arabia in 1957. He was the son of a very rich man and inherited a lot of money from his family.

The Conservatives were re-elected yesterday. They won a majority government. As the leader of the Conservatives, Stephen Harper will remain Canada’s Prime Minister.

For the first time in history, the NDP came in second and is the “official opposition.”

The Bloc Quebecois had historic losses, falling from 50 seats in Parliament to just 4. It was also an historic election for The Green Party, which won its first seat.

Across the country on Monday, Canadians voted for a Member of Parliament (MP) in their area, or riding. Having an MP in Parliament is known as having a “seat” in Parliament. The MPs who get elected work in the House of Commons in Ottawa to represent the people who live in their riding.

The “most wanted” man in the world is dead.

Osama bin Laden was responsible for many terrorism attacks including three in the United States on Sept. 11, 2001. That event is commonly referred to as 9/11 (pronounced “nine-eleven.”)

The US President says 9/11 was, “the worst attack on the American people in our history.”

The United States military has been looking for bin Laden for nearly 10 years. Last night, the US president, Barack Obama, went on television to announce that they had killed bin Laden where he was hiding in Pakistan.